Having received a number of photos from many environmental friends, I paid a visit to Wied l-Isqof, yesterday, Sunday 3rd March 2019 to see for myself what is being done.

The photos taken shows the great irresponsibility in the work being supported, and financed by the Ministry for Transport. To the extent that now I regard biodiversity destruction in the Maltese Islands as synonymous with the works undertaken by this Ministry (also keeping in mind that the Planning Authority is also in the portfolio of this Minsiter)

Following a lengthy exchange of emails with officials of the Ministry for Transport, all I could get from them is an apologetic reply:

Meaning: Many thanks for your email and as I told you before in previous correspondence, even when we met in the past, both of us have the interest of  our farmers, who with so much dedication cultivate their fields in the country, something, which is important for biodiversity.

With regards to trees, unfortunately these were damaged by the storm, but we are going to plant indigenous trees as you so rightly recommended in your reports which we have commissioned you to compile for us.

NO,  definitely not, this is not in the interest of the farmers. They will have to pay a heavy price because of such works. And there were other suggestions in the reports mention. Works being undertaken are diametrically opposite to the recommendations made.

Furthermore information forwarded by me to the Ministry for Transport, and others, have all been ignored, , which leads me to conclude that they are reluctant to stop the destruction being done:

All these are, according to the Ministry for Transport, in ‘the interest of our farmers’. NO this is not in the interest of our farmers as far as I am concerned. They will have to pay dearly for such mismanagement of the environment.  Most of the works can be done with more thought, more professionalism, and more attention to local and international obligations. But it seems this is not in the interest of the Ministry for Transport. It seems that they are having more fun in such destruction, and how they are spending the EU money, despite the public outcry and criticism of such destruction so loud on social media.

I believe that this follows the complete failure in managing transport by the Ministry for Transport who are now turning to exploit every country path, in ’the name of farmers’ to widen and give it a fresh covering of concrete so that it can be used as a by-pass for traffic. Naturally with a little bit of help from their Planning Authority.

This is being done in a number of valleys both in Malta and in Gozo.

Hope I won’t be disturbing the Environment and Resources Authority, but can they intervene please to stop such destruction of our biodiversity?

Some of the photos taken yesterday, of the works blessed, authorised and paid for by the Ministry of Transport, from public and EU funds, naturally for the ‘benefit of farmers’ 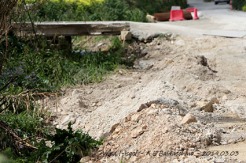 Valley bed filled in. No problem it is only destroying biodiversity.

More effects of the strong winds? Why not tell this to the marines? 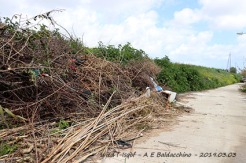 For the benefit of our farmers: a four-lane concrete road in the valley bottom!

The valley bed reduced to a gutter to make way for a four-lanes concrete road. 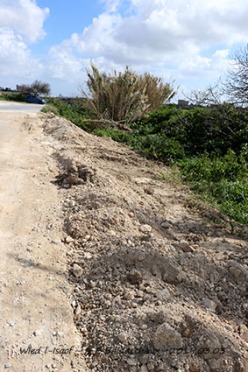 More destruction of the valley bed, naturally ‘for the benefit of farmers’ too. 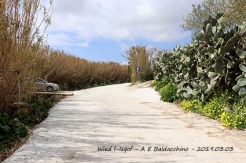 Rejoice farmers, rejoice. This is all being done in your name. You can now also race your pickup trucks without any fear of having them scratched. Rejoice. 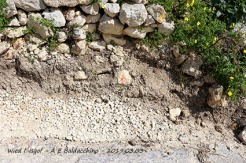 Future Ministers will have to apply for EU funds to restore collapsed rubble walls which collapsed through the help of EU funds. 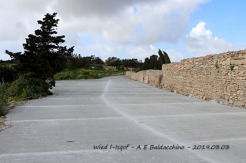 A country path for the benefit of our farmers! It has to be the Ministry for Transport to come up with such a vision, naturally with a little bit of help from their Planning Authority. 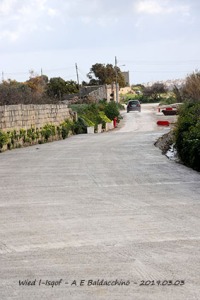 Will we be having horse racing in this country path built for the benefit of farmers, and also to accommodate the former too?

A splitting image of Mepa

A splitting image of MEPA

MEPA’s failure in its environmental responsibility started from day one. Barely a week from the ‘merger’ with the Environment Department, in 2001, I was told in a joking vein: “forget about environment; it is development which dictates here.”

And so it was to be. And so it is today. Honouring national and international environmental obligations, which were never understood or wanted to be understood by MEPA, seemed like trying to swim up the Niagara falls. Eventually, environment became MEPA’s Cinderella, leading to its present headless mummified state in limbo.

After two years in government, it has now been thought appropriate to resuscitate such a mummy. Despite being an electoral promise, the move is accompanied by a lot of fanfare and publicity, and this raises more questions than answers. Is it to hide past failures and the procrastination in making such move? Is it to detract from the fact that environment has been kept out of the portfolio of the Minster for the Environment but is in that of the Prime Minster? Is it to make up for the environmental degradation which also saw the Environment Directorate degenerate into a mummified orphaned headless Cinderella? Is it just meant for that part of the electorate who can be convinced that a circle is square?

To consolidate MEPA complete disregard for the environment, on its death bed MEPA, forwarded a report to the Prime Minister, a couple of weeks ago, suggesting that Żonqor was the best site for the university development. The report completely ignored the Environment Directorate, it’s acting Director (no Director since change of government) and the MEPA board too.

MEPA has stooped so low, with such farcical unprofessional behaviour along the years, that it has lost all credibility. It is in need of new image to “secure better planning”!  Is the colourful publicity and change of name merely dressing the old wolf in new sheep’s clothing? Many already see the Executive Council referred to in the new Bills, as already set up and running, as evidenced by the Żonqor report. It seems that the rape will go on, till there is nothing left to rape.

As advertised, MEPA will be no more, and will only be remembered in the books of history especially for its complete environmental failures. Few would shed a tear.

Future generations have a right to know who was responsible for the protection of the Maltese environment, which they have lent us.

I won’t. I have gone through the new environment bill. An exercise undertaken by a parliamentary secretary in the office of the prime minister. The new bill transposes all the environmental provisions from the MEPA Act (except for some ‘overlooked touches’): a cut and paste exercise to ensure that the EU Environment Aquis obligations are all there.

If the new Environment Act is to put the environment high on the agenda, why was it not possible to achieve such aims, with the same legal provisions, when it was under the responsibility of the Prime Minister? Is all this fanfare a confirmation of failure? MEPA has been declared a monster, without any political control, when as everybody knows it functions by political nods, as one concludes from a rationalised  żonqor point.

I honestly believe that the Minster for the Environment, Leo Brincat, can administer the environment on professional lines. Perhaps this is why he has been kept away from environmental responsibility, and MEPA, environment and all, are still not in his portfolio after two years. It is nice to have someone to shield the blows though!

One now hopes the Minster for the environment won’t be given a ‘promotion’ and be replaced by someone whose main qualification will be to convince us that he is ‘balancing’ environment and planning, naturally in the ‘national’ interest. This would only result in handing over of a mummified headless Cinderella from limbo, nicely adorned as a skeleton on a string, controlled by the Executive Council. 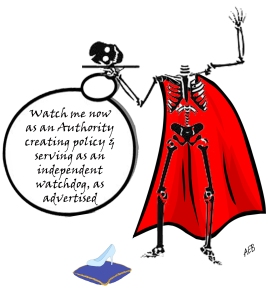 What trust can one have in the headless skeleton, resuscitated and dressed as an Environmental Authority? In the absence of such trust, which is not easy to re-establish, it is very difficult to believe everything that is being said.

Those who yearn for a better future, better social wellbeing, a better environmental home, have to fasten their seatbelts. We are all in for a rough ride.

I sincerely wish all the good luck to the Environment Minister who will need all the help he can from genuine individuals and social entities, especially from the political field.

Unfortunately though he will have a lot of bones to pick with.

PS – graphics were added to the original article.