The proposed tunnel crossing under the 10km Gozo Channel seems to have surfaced again. Those in favour of this tunnel are putting forward every thinkable reason to justify such a tunnel. Such justifications include the long waiting queues on both sides of the channel, the Gozo aging population, the lack of job oppportuity in Gozo, and also that residents do not want to rely on touristic income to live in Gozo. 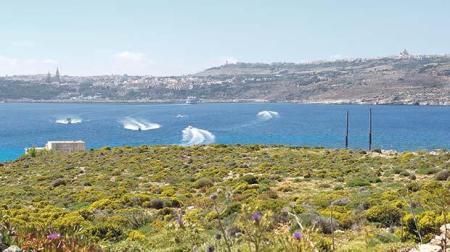 Photo: viewingmalta.com from The Times

A feasibility study concluded in favour of the tunnel. Externalites, that is the hidden costs that society and the environmenet will have to pay, were not even mentioned, despite the fact that it was concluded that profits in millions would be achieved. Geological studies have not even been initiated. It seems that these are not important as long as it has been concluded that there would be a financial profit.

The geologist Dr Peter Gatt, has pointed out that the area is full of large and deep faults. He also added that it is not only difficult to tunnel through these unstudied faults, but this can also be dangerous to human life.

The maximum depth of water in the channel is estimated to be 30 metres. Excavation depth in the rock bottom, without the availability of geological studies, is estimated to be 70 metres, that is 100 metres below sea level. The openings of this undeground tunnel can lead to the Nadur lowlands on Gozo and Għadira on the mainland.

A number of questions not only have not been answered, but have not even been asked, such as:

How will the tunnel affect both islands from a social and environmental point of view?

Have studies, if any, shown the impact of excavations at the two ends of the tunnel, on the hydrology and agriculture of the areas?

How will the estimated meagre one to two million cubic metres of excavated material be disposed of, and what will be its social and ecological impacts?

Have any studies been done to see if the tunnel will further attract Gozitan youths to spend the weekend on the mainland for entertaining purposes and thus contributing to further add to the exodus from Gozo?

How will the tunnel affect internal tourism? I remember that in the recent past, when there was the ferry service available after the operettas held in Gozo, the commercial entities complained because this affected the bed nights in Gozo because theater visitors could easily return home after the performance. The tunnel would make this possible 356 days a year.

How would the tunnel impact the number of bed nights taken by foreign tourists in Gozo?

A fast ferry service would be the best sustainable solution from a social, environmental and even economic point of view

Initial construction costs of the tunnel are estimated at €300 million, which can easily double, depending on the geological studies. What would be the additional cost with respect to maintenance, and other requisites, for the safety of commuters: for example extraction and injection of fresh air through the tunnel? And how would these increase the toll that commuters will have to pay to cross through the tunnel?

These financial, social and environmental expenses, with the added externalities, are needed for crossing just a 10km stretch of water, not taking into consideration other construction problems. One has also to keep in mind any arising problems during its running, such as traffic accidents or other unforeseen circumstances.

The traffic problems on both sides of the tunnel will not only remain the same as they are today, but there is the probability that these will be further accentuated. Unless of course additional millions are pumped in with further social and environmental hidden costs.

Without doubt, the present facilities to cross the channel are anything but customer friendly. BUT, the tunnel is not the sustainable solution.

The present ferry service contributes to a substantial part of the problem.

It has no competition at all to render it more friendly and adjusted to commuters’ requests and demands. It is a monopolistic service.

Such is the monopolistic management that if there is somebody who believes that he is more important than all the commuters waiting at both quays, he can call back the ferry which has just departed to accommodate him!

The waiting commuters can wait a little longer, be they workers, students, tourists or just common citizens. And the expenses incurred to build such a sustainable tunnel are not the way to control such a monopolistic service.

The ferries in use today were launched in the early 2000. During that time the demand was not as heavy as it is today. Following intensive, successful advertisements to visit Gozo, the demand increased by leaps and bounds, reaching the million mark today. But the number of ferries remained as it was originally, resulting in occasional delays and long queues. If the service were run on competitive lines, without any doubt the problem would not be so acute.

It is quite a relief to hear that a fast ferry service is an alternative to the tunnel. This fast service, besides shortening the time of crossing, can also take commuters, car and all, from Mġarr not only to Ċirkewwa, but also to Valletta, Sliema and any other planned destination on the mainland. This can be enhanced by the availablility of a shuttle bus service from the quay to various bus terminuses.

Such a fast ferry service would be the best sustainable solution from a social, environmental and even economic point of view. Not only so, but it can be faster for commuters, it will avoid time in traffic bottlenecks, it will ease the stress of commuters, it will contribute to the decrease of vehicular emissions, it can also be cheaper and daily commuters can leave their cars on the quay close to home. The tunnel does not address these benefits.

Obviously such a fast ferry service cannot be afforded monopolistic protection, or the problems will still persist.

The other politician, from the other side of the fence, said that this is a Gozitan project which will benefit Gozitans, and that both parties will include it in their electoral manifesto. Does this mean that those who are against such a tunnel should not vote for the parties who are in favour? A Gozitan friend of mine who is against the tunnel, after hearing such comments on the air, told me that both parties have lost his vote.

The present tunnel vision is more like walking blindfolded searching for a presumed lost black cat in a dark tunnel, to the background music of counting machines.