I would like to join Anna Spiteri’s appeal for the protection of the Senglea trees which are intended to be uprooted because of unjustified reasons, when less expensive measures can be taken to manage and incorporate them in the envisaged works. I would also like to add that the recent unprofessional uprooting of established trees which all have a role in the local ecosystem, seems to have run out of control. I have never experienced such misuse and mismanagement of such a natural heritage, done on an official basis, utilising both public and European funds.

Such use of public and European funds is not contributing to any protection, appreciation or to the safeguarding or embellishment of our urban landscape, thus having a drastic negative impact on the social and ecological environment
of the Maltese Islands.

While appreciating that considerable funds are being made available for such ‘landscaping’ and also government’s intervention to acquire European Union’s financial help towards such an aim, I regret to say that the way these resources are being used falls short of expectations and obligations, lacking any professional planning, wise use and proper management of local biodiversity. One cannot be blamed for thinking that the main aim of such activities is just commercial.

As you may be aware, a great number of trees were hacked, uprooted, transported and dumped elsewhere, from areas such as those at Fgura, Żebbuġ, Cospicua, Mdina Ditch, Mellieħa, Luqa, Santa Lucia, Raħal Gdid, Corradino, Marsa, Senglea, San Ġwann, and Victoria and Xewkija in Gozo. More uprooting and removal of trees is planned in connection with the EU TenT-financed project at Salina Road, Kennedy Grove, and the Coast Road, as well as the proposed uprooting of a substantial number of trees, including old Holm Oaks (Ballut) in Floriana and outside Valletta. I would also like to bring to your attention the destruction of indigenous protected trees which were planted by the late Prof. John Borg at San Anton Garden.

As you may also be aware, there is quite a public outcry at this lack of appreciation of local established trees and the complete disregard of public opinion. I am sure that you do agree that the public has a right to be involved in such decisions, a right which unfortunately is not being completely given.

It is indeed a pity that such scarce resources are not being used and managed in a more professional, open way, both from the economic, ecological and social point of view. There is a great potential with the available resources that could offer more protection for the local biodiversity, a better balance of payment, more local opportunities and jobs in the protection of the local biodiversity, better embellishment of urban areas, the boosting of local environmental education the more so when the general public is crying for such measures. Unfortunately, because of myopic and other commercial reasons, all these are being ignored.

It would indeed be greatly appreciated if you can intervene in the interest of the people and the protection of local biodiversity, and ensure that such commercial activities do not have any negative impact on local biodiversity, that local and European funds are better utilised and better managed, and that the general public is involved in such decisions. After all these are all incorporated in a pre-electoral promise and are also incorporated in EU Environment Acquis obligations.

By now those who love nature and  trees should be aware what the Government Policy. on trees in the Maltese Islands. is. All the established trees are in danger of being hacked to a  pitiful state, whether in urban areas,  in public gardens and protected areas.  I will list some areas and leave readers to add to them: Valletta (Bus terminus), Zebbug (Vjal il-Helsien – certianly not for the trees), It-Tokk Gozo, and the Road leading from Xewkija to Rabat in Gozo; Balzan, Mellieha, Fgura and Luqa. Trees at San Anton Gardens do not escape the massacre either, as those which have been planted by the late internationally renowned  Prof John Borg, who used to plant indigenous trees in this garden,  such as the Sandarac Gum Tree (Sigra tal-Gharghar), the Mastic Tree (Deru) and the rare and only specimen of Christ Thorn (Sigra tal-Kuruna).  The latter two have been butchered and some completely cut down to the ground. 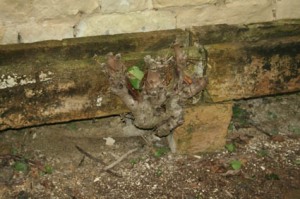 Natura 2000 sites, which have been declared for their ecological importance and accepted by the EU, did not escape the massacre either, as the remains of this Ash tree shows. 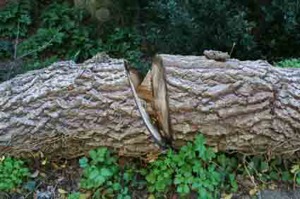 It had to be a ‘Gakbin’ to stop this Government massace at Buskett – an EU Natura 2000 site.

Now this Government Policy –  towards which 7 million Euros were voted each year for five years, to help with landscaping – plants new established trees from overseas. Amongst others, these  include Palm trees (some had Red Palm Weevil too, remember, although one must admit that they too were  accompanied by a phytosanitary certificate which was supposed to confirm that they were free of disease and other organisms) and other exotic trees – naturally at a price and at a profit, paid from public funds. Such policy also involved the importing and planting of some trees, which after some years  were uprooted (like those near the War memorial in Floriana). Is there somebody who is finding money growing on trees? 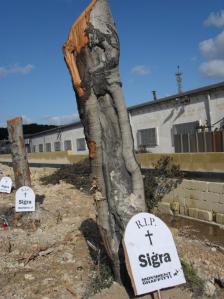 Initiative by Moviment Graffiti placing tomb-stones against butchred trees. Any other ideas?

If one follows the history of tree protection inMalta, urban trees were protected and needed a permit from the Department of Agriculture for their uprooting or pruning (LN 12 of 2001).  Not that what is now left of the once glorious Department of Agriculture has ever objected to uprooting or butchering of any tree. And now the trees growing in urban areas are up for grabs: anybody can saw them off, mutilate them , uproot them, kill them, you name it, it can be done without any permit, without any condition, without any guilty feelings. And though the Agriculture Department is responsible for the protection of trees and also for landscaping, it seems that there is no accountability anywhere. Government replaces these trees with imported exotics. Somebody mentioned the 34U campaign! I cannot understand for whom the ‘U’ stands! The majority of the trees being planted, are all imported. But Government has a clean conscience,  like Pontius Pilate, because it says that it is not importing any trees but buys them  from the local market. Intelligent eh! First somebody imports them and then Government buys them and pays for them from public funds! Somebody must be spending a lot of time with primary school children.

But one has also to remember that this Government’s Tree Policy, is in line with the Government environmental pillar (now dead and buried) and also with the political dictum that Government should not be judged by what it says but by what it does.  A look at the massacre of trees shows  a clear picture emerging showing  what Government is doing towards the protection and care of the environment.  Something that Government should have done long ago is to appoint a minister for landscaping, someone who has a vision and understanding, who hears AND listens, someone who is capable to accept the fact that he does not know anything about the subject and accepts advice.  Government should appoint a Minister, who besides the economic aspects of such ‘landscaping’, should also be able to understand the social and ecological negative impacts such activities are having. Government may be hearing but it never listens, as the massacre of trees show.

There have been NGOs and private individuals voicing their concern on such insensitive treatment of trees. It seems that the economic aspect of such massacre is too strong to take in consideration any social and ecological negative impacts. Now it seems that an unofficial Government spokesman has also enlightened the general public that trees move from place to place according to the needs of the day.  I can now understand why there are so many accidents of vehicles colliding with trees: the driver may not be aware that there are  moving rtrees crossing the road! Perhaps the Minister responsible for transport can issue new traffic signs to inform drivers of crossing trees. Pathetic! Trees move from place to pace only when there is no planning, if planning means anything to anybody these days.

I am attaching some photos of the result of such commercial activity undertaken by Government and paid out of public funds. The people and future generations will definitely remember who was responsible for such a waste of resources, such a waste of their money, and such an onslaught and insensitive treatment of the social and ecological environment.  No wonder that the Government is now  saying that it needs to be closer to the people to hear their complaints after the mess some of his ministers have landed him into.

As an addendum with regards to the three photos attached below, wouldn’t it be a good idea to choose one of these,  make a miniature trophy of it, and  present it to  Government, whether present or future, so that it can be ceremoniously given to the Minister whose decisions, ideas, stubbornness and policies have been the most damaging to the environment?  This used to be organised in the past by some NGO, but unfortunately not any more these days!

And if you had to have your choice, which one of the photos would you chose? And to which Minister would you recommend that it should be given?

Take your pick from one of these:

1.    Social and ecological damage through insensitive importation of trees – the work of the Red Palm Weevil 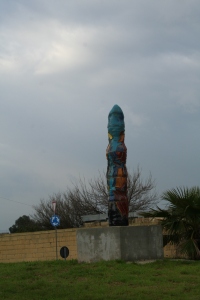 3.   A work of art by the Creator, adulterated by crass ignorance of man