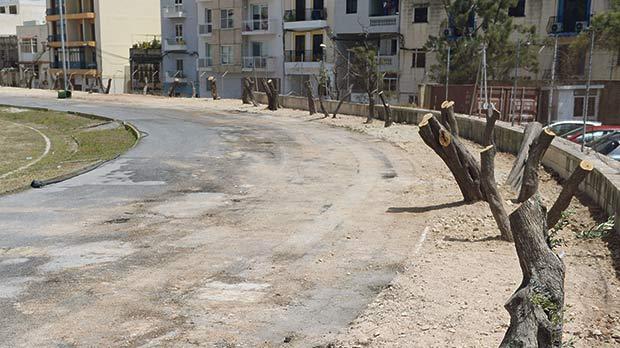 The butchering of trees on the campus of the University of Malta was quite a shock, which not only questions professional, technical and administrative management, but also the void there is in the offering of opportunities in the practice of controlling the establishment, growth, composition, health, and quality of forests to meet diverse needs and values – silviculture.

Following the justified uproar by organisations and individuals, the University issued a statement, which, if anything, rubs more salt into the wound.

The undated and unsigned statement, anything but professional, tries to absolve everybody from responsibility for this butchering job. There is, of course, at least one obvious accountable person.

The University statement outlined the fact that it “had received complaints from the Gżira local council, which raised residents’ concern about safety and security issues following burglaries in the area.

The residents suspected that the dense overgrowth of the trees could provide cover for unwelcomed prying. There were also complaints about falling twigs, olives and leaves on cars parked below.

The University succumbed to the local councils’ mentality which has, and still is, seeing trees butchered around the island because of selfish complaints such as: shedding of leaves, bird droppings, obstruction to seeing a patron saint statue going in and out of a church, and hindering residents from watching firework displays.

Who would have thought that the University would also join in blessing the chopping of trees on its campus for similar puerile, amateurish, selfish reasons, at the expense of society and the environment.

The local mentality, which is showing great hatred for trees, has completely taken over even at the University

The mentality in this country, which is demonstrating great hatred for trees, has completely taken over even at the University, to the extent that, because of lack of monitoring of work in progress, not only those trees which attributedly were contributing to “unwelcome prying and dropping leaves and olives” were chopped down but even all the 51 indigenous mature olive trees on the campus.

Even those not contributing to these alleged inconveniences were chopped down too, including those on the sides of the track on campus, which in no way could have been involved.

Less than half were contributing to peeping toms, or raining leaves and olives, if at all. Interestingly, the 10 invasive Australian she-oaks (casuarina) growing over the parked cars beneath were not touched at all.

Their wood is not worth anything.

The University statement also reveals that “the olive trees had grown inordinately high, and the upper branches had dried up the result of unprofessional pruning. In Malta there are no professional tree pruners, but only self-appointed ones.

However, according to the University, the Precincts Office had decided to go for the most favourable offer because “the contractor had previously done satisfactory pruning on campus”.

And this is the result of the professionalism accepted by the University.

The Insiter, the “only student centric newsletter” of the Student Media Organisation of the University, on May 11 released information on this tree butchering.

The statement, which also emphasised that the University expressed its regret over the outcome of the olive tree pruning, quoted the landscaper from the Times of Malta that the trees had a fungal infection, which is commonly referred to as a Peacock spot.

There are biological ways how to control this fungus. But the cherry on the cake, oozing out of the professionalism at the University, was the statement on this newsletter, and I quote: “And which we can’t be sure that the trees were indeed infected or that such drastic pruning was necessary, it should be easy to check on the tree’s health next year.”

A clear indication that there was no certainty that the trees had such a fungal infection, and even if they did, this was not the way to manage them.

A number of measures the University has completely ignored are:

The conclusion seems to be that even the University falls short of environmental professional management, both from the technical as well as the administrative point of view.

Such butchering should never have taken place at University. And no amount of regrets can rectify the amateurish environmental damage done, professionally endorsed and officially paid.

Not even the planting of 30 new trees, the more so if these are imported, as I am sure the professionals at the University know about the national and international obligations Malta has.

There seems to be a flicker of light at the end of the long and deep tunnel of mismanagement in the field of natural environment. The statement issued by the University says that: “This serious matter is being looked into in detail by the University authority to determine whether further action should be taken.”

The butchered trees are indeed a wake-up call for the University; a very expensive wake-up call paid by the general public and the environment.

The University of Malta needs to take immediate steps to offer professional training so that those self-appointed landscapers and tree-pruners can become qualified professionals and would not be able to wield a chain saw unless they have at least a diploma from University on how to professionally appreciate and manage the Maltese biodiversity, in the interest of society and the environment.