Use and overuse of pesticides

Use and overuse of pesticides

Reference is made to the letter on ‘The pesticide levels’, by Marcel Pizzuto, chairman of the Malta Competition and Consumer Affair Authority (Febr 4).

We would like to bring the following to his attention and to the attention of everyone concerned.

We asked for a meeting with the Parliamentary Secretary for Agriculture, Roderick Galdes, regarding the use and overuse of insecticides, even in roads and roundabouts. These are affecting the population of honey bees and the flora they depend on.

We also wanted to bring up the subject that foreign honey products were being sold and labelled as products of Malta. This is unfair competition and affects local honey bees and honey producers.

We were met by the parliamentary secretary’s chief of staff on July 17, 2014, and told most of the matters did not fall under their remit. We were referred to the Customs Department. He undertook to assist in any way possible, but this did not lead anywhere.

So we met the Director of Customs on August 25, 2014, and explained to him the above. We were also told that some of the subjects were not under his remit and we were referred to the Malta Competition and Consumer Affairs Authority.

On August 28, 2014, we wrote the permanent secretary at the Health Ministry about the matter. Since no reply or acknowledgement was received, we sent a reminder, dated September 28, 2014. All to no avail.

On September 15, 2014, we met the acting director general and his legal adviser at the Malta Competition and Consumer Affairs Authority and discussed the matters mentioned above.

Once again, we were told the subject did not concern the regulator but was more related to the Environmental Health Directorate at the Health Ministry.

We wrote again to the acting director general and to his lawyer (Consumer Affairs) on January 12, 2015, and copied the letter to, among others, the MCCAA chairman, the head of secretariat at Agriculture and the parliamentary Ombudsman, asking for a reply.

Two days later, we were informed that a reply was being prepared by MCCAA. A reply dated January 16, 2015, was indeed received. The letter only served to shed light on the fragmentation between government entities, leading to a failure to take concrete action.

Then, on January 20, 2015, we were informed that the matter was referred to the Environmental Health Directorate at the Health Ministry.

The result of unnecessary spraying of herbicides and pesticides paid out of public funds.

On February 6, 2015, the attention of the negative impacts of weed killers were referred to the chairman of the Environmental Landscapes Consortium. We received a letter from the office of the permanent secretary at the Ministry for Transport and Infrastructure, stating that “ELC feels that any complaints regarding the use of herbicides and weed killers should be addressed to the authorities concerned”.

Following our efforts, which we believe public entities should be doing in the first place, can the MCCAA chairman please inform us whether the regulator is really interested and willing to investigate unfair trade?

Spraying of herbicides and pesticides in the countryside, also paid out of public funds.

Are any of the authorities in general (especially those responsible for the environment, health and agriculture) interested in the indiscriminate use of pesticides and the effect of this on the public’s health, which, in turn, affects our economy too (sick people are unproductive, apart from needing treatment)?

We would also like to highlight that, since our initial efforts, herbicides are still being sprayed uncontrolled, biodiversity, including bees, is still being decimated, and unfair competition – from products being sold as ‘local’ when they are anything but – is still ongoing. 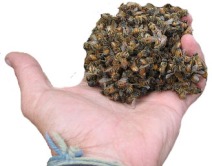 We fully agree with the MCCAA chairman that: “Finally, one would have thought that before publishing such an article in the Times of Malta which could alarm consumers unnecessarily, verification would have been carried out to ensure that this was the result of an interview in order to ensure that a factual picture is given to its readers.”

However, this does not justify the blatant lack of concrete action by the government (collectively) to safeguard the environment, to safeguard our health and also to help preserve the business of genuine Maltese artisans. Nobody can be blamed for thinking the worst under the circumstances.

More waste of resources at the expense of the public and biodiversity – also paid out of public funds.

The problems we are highlighting require a concerted effort and concrete collective commitment if they are to be resolved. Maybe the MCCAA chairman is willing to take the initiative in this respect. This was mentioned at the meetings held on July 17, 2014, and September 15, 2014, but to no avail.

If the documentation we have at our end would help the authorities in any way, we would gladly oblige.

Ivan Mifsud is a lawyer and Alfred Baldacchino is an environmentalist.