On Friday, 1 st July, while driving from Rabat toward Valletta at 11.30am, I noticed that the turf at the  roundabout along the Rabat Road (intersecting with Zebbug/Mtarfa bypass) was being watered with sprinklers. Some of the

sprinklers were simply watering the adjacent road, to the extent that any driver who was so thirsty could simply put his head out of the car’s window and have a sip. Those who wanted to clean one side of the car could also go round twice or thrice and have their car’s right-hand side cleaned.  Naturally the  water spread on the road, cars splashing in it , eventually finding  its way along the Zebbug bypass. The couple of photos I took can give an idea of such a waste of resources, more acute if one adds the energy used to activate this.

Now this is not the first time I have seen this, and not only at this particular roundabout.   Many others have also commented in the media. In a  week in March, on a rainy day, yes in March, and I had the car wipers busy cleaning the rain water from my windscreen, the sprinklers at the Santa Lucia roundabout were busy watering the turf at that roundabout.  As usual a couple of these were sprinkling the road and not the turf, perhaps an ingenious computerised way of diverting water from the turf this  having been saturated with the sprinklers’ water and the rain water.  And this leads me to ask a  number of questions that I find great difficulty in answering: 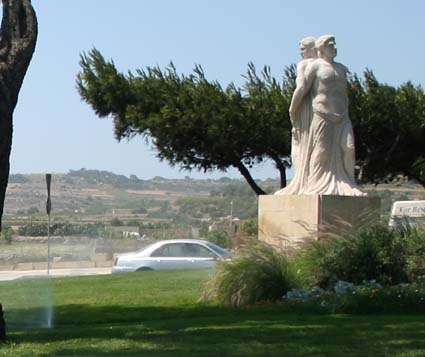 The Adam and Eve guilty feeling

Even the stone statue in the middle of the said roundabout were so denuded of reasons to justify what they were seeing, that they had a look of a guilty feeling.  They looked so ashamed and embarrassed at such greed  that they could not even look each other in the eye.  Reminded me of the guilty feeling Adam and Eve might have had after the biblical apple-affair!  So they preferred to look at the people as if to support them and pity them for the misuse and mismanagement  of their resources!  But I suppose those who are gifted with more wisdom that I  (politically that is)  will tell me that politicians are made of much more precious stuff than stone – they cannot possibly have such guilty feelings!

The closest answer I could possibly  find  to all  my questions is incorporated in an article by Martin Scicluna  in the Malta Independent on Sunday of the 3rd July 2011, as per attached link: