Glyphosate & you – with addenda

Glyphosate & you – with addenda

Following the article in the Times of Malta, which was also posted on this blog, the Minsiter for the Environemnt, made a statement on Glyphosate during the parliamentary sitting of 16th January, 2017.

I am posting a photo shot of such comments, downloaded from the Minister’s Facebook page, and kindly forwarded to me by the Clean Food Movement. 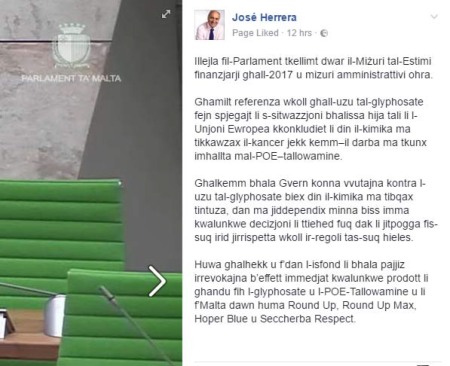 A clear, official indication that the commercial rules of the free market come before any concerns for human health, the safeguarding of the ecosystem, and additional public expenditure to correct the negative impacts. All in the name of commerce!

This despite the official EU claims that the EU does not authorise the placing on the market of pesticides, because this is the responsibility of the Member States, as explained in the previous post on this blog. I still cannot find any reference where the EU concluded that glyphosate is not cancerogenic.

Previous findings from the World Health Organisation’s International Agency for Research on Cancer, concluded that glyphosate is a ‘probable carcinogen’.

A study was conducted over two years at Kings College, London. It found that residues of popular weedkiller glyphosate found in food can cause fatty liver disease.

Rats were administered a very low daily dose of four nanograms per kilogram of bodyweight per day. To put that into perspective this is 75,000 times below the levels of glyphosate permitted in the EU in our food.

According to lead researcher Dr Michael Antoniou, previous studies on human urine found that we often consume around a thousand times the amount of glyphosate the rats consumed. Regulators globally accept toxicity studies in rats as indicators of human health risk, making this a signiÏcant, a truly disturbing, discovery.

Glyphosate has only now been recognised as a cause of the liver disease (nonalcoholic fatts liver disease), which can cause fatigue, weakness, weight loss, loss of appetite, nausea, abdominal pain, spiderlike blood vessels, yellowing of the skin and eyes (jaundice), itching, and swelling of the legs and abdomen, and mental confusion.

I do honestly hope that no politician can dare say that there is nothing wrong with this as long as it is not cancer.

Unfortunately, I can only join the bees and say: “Thank you Honourable Minister” for the heroic efforts towards human health and the environment. Future generations will be grateful for the ‘price’ they will have to pay.