It was definitely good news to hear the new Environment Minister announce two new regulations for the protection of biodiversity during the last meeting of the Permanent Committee of the House of Representatives for the Environment and Development Planning (June 28).

Trees growing as they should grow, not like those at the University Campus. Photo Times of Malta.

Good news to hear that two sets of regulations will soon be published: one on the promised and much awaited protection of trees and the other on the transposition of the new EU regulations on invasive species. Credit has to be given where due. 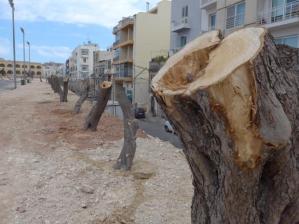 Endemic ‘landscaping’ in the Maltese Islands. And also on the University Campus. Photo A E Baldacchino.

One hopes the new regulations on tree protection will address the present mismanagement of trees, mostly paid out of public funds. And that they will also include provisions which will put an end to barbaric practices such as those which took place at the University campus, where close to 60 indigenous mature olive trees were butchered.

José Herrera’s brief reference to invasive species shows he is in need of urgent help and exposure to the definition of invasive species. It would be to his benefit if he were to read, even if only the preamble, the EU regulations about invasive species which his ministry is about to transpose to local legislation.

Regulation (EU) No 1143/2014 of the European Parliament and of the Council of October 22, 2014 on the prevention and management of the introduction and spread of invasive alien species, will definitely put Herrera in a better position to understand the obligations of this legal instrument on invasive species.

One hopes the new regulations on tree protection will address the present mismanagement of trees, mostly paid out of public funds.

The more so since these EU regulations contain many references to other EU and international conventions binding legislation on invasive species.

Such references will enable Herrera to understand the real legal and technical definition of invasive species in the field of the protection of biodiversity. He will then certainly realise how poor the definition he has been handed is, on which unfortunately he is basing the whole concept for the protection of trees. 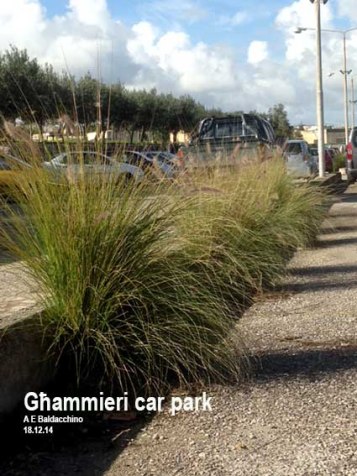 Fountain grass – one of the recently introduced invasive species – growing profusely at the Għammieri car park. This does not have any impacts on any gene pool, but it is growing wild in an area which is under the responsibility of the Minister for the Environment.

It would be a great help to him if he arrived at his own conclusion on these international legal provisions, and being a legal person it should not be that difficult.

Herrera’s body language and brief speech on the advice given by his technocrats regarding such EU obligations put him in an embarrassing and uneasy position especially when referring to the scientific aspect of invasive species. He showed that he is not au courant with such important legal instruments.

It is quite evident that these have not yet been brought to his attention although one cannot understand how this can be done by technocrats who may not be aware of them. 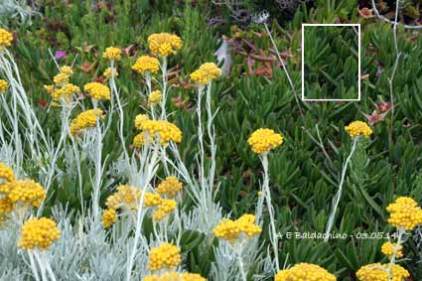 Hottentot fig – one of the worst 100 invasive species in Europe. Yet planted and paid for by public funds for landscaping purposes. The photo shows how it is suffocating the endemic Maltese Everlasting (Sempreviva ta’ Għawdex) in Dwejra Gozo. It does not have anything to do with polluting the local gene pool of any indigenous species, yet it is one of the worst invaders.

Invasive species control is not only relevant to the pollution of the gene pool of indigenous species, as Herrera seems to have been advised. The negative social, economic and ecological impacts of imported invasive species such as fountain grass, siris tree, hotentot fig, tomato leafminer, and the red palm weevil (just to mention a few), do not have anything to do with the pollution of the gene pool.

Most of these invasive species have and some are still being used in this so-called ‘landscaping’ paid from public funds by one of his colleagues.

One invasive species mentioned is related to agriculture. The Plant Health Department, which is in his portfolio, can shed a lot of light on the negative impacts of invasive species. 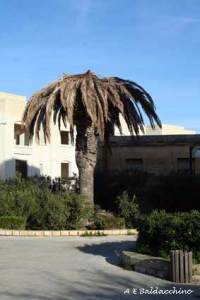 One of the 5000+ dead palm trees killed by the red-palm weevil, imported with palm trees to be used for landscaping purposes. Profits were made, but society and the environment are still paying the cost of such a short-sighted political decision.

Herrera’s speech also shows his need to widen his view on what is an invasive species. Admittedly, he is still green on this delicate subject matter, which makes such need more urgent. The definition he is projecting can only have come from technocrats who have never attended or been exposed to international meetings on the subject, be it that of the Bern Convention, or the Convention on Biological Diversity or of the European Union. If they had, Herrera would be in a more comfortable position.

The first decision taken by Herrera as an Environment Minister against the continued use of glyphosate was widely applauded. This he achieved because he wisely and attentively heard all stakeholders and took the decision himself. A decision which made him stand head and shoulder above all the other EU environment ministers, taking in consideration the social and ecological impacts of the further use of this pesticide.

It is an open secret that his technocrats’ advice was diametrically opposite before Herrera decided to listen to what others were saying. It now seems that the same blinkered scenario is leading Herrera on the same negative footsteps with regards to invasive species.

Code of Conduct on Invasive Alien Spaces. This booklet was financed by the Ministry of Finance, the Economy and Investment through the Fund for Hosting International Conferences in Malta (MFEI Circular 5/09).   Surely a must read for every Minister of the Environment, before taking any stand on invasive alien species. Incidentally the species behind bars in the picture is a hottentot fig flower.)

If the regulations covering the protection of trees are to address invasive species as explained and projected by the Minister, than these are bound to fail even before publication.

With regards to the other local regulations transposing the EU regulations, being regulations already approved and published by the EU, these are already in force in toto in all EU states. It would indeed be a great pity if Herrara’s new regulations contradict others.

Whether Herrera choses to dance to his technocrats’ music, and bar all other views with regards to the obligations of international and EU obligations, is up to him. As Environment Minister, Herrera is responsible for the administration, monitoring, implementation and enforcement of these EU obligations on invasive species; even if these are ignored by one of his colleagues.

This is a collective responsibility shared with his Cabinet colleagues. And one cannot image any technocrat worth his mettle to even think that requests to honour EU obligations on invasive species regulations can be attributed to any fundamentalist.

It is assumed that Herrera can easily understand these legal obligations, when and if these are brought to his attention.

One regrets to say that EU Environmental Acquis with regards to protection, management, enforcement, communication, education and public awareness in the Maltese islands are at their lowest ebb since accession to the EU in 2004.

Herrera has a golden opportunity to address this, but not through half-baked, possibly contradicting regulations and comments not exactly in line with EU obligations being suggested by his technocrats.

One cannot put all the blame on Herrera. He should be given the time and opportunity to inform himself, hear carefully and more important, to listen.

Whether he desires to do so, to be able to reach his own reasoned political decision, is completely up to him. I just cannot understand why he is making it so difficult for himself.

The political duty and decision to inform himself better before concluding is solely Herrera’s, and not that of any of his technocrats. Once bitten twice shy as he is sure to know.

Alfred Baldacchino is a former assistant director at the Malta Environment and Planning Authority’s environment directorate.

3 Responses to Trees and invasive species